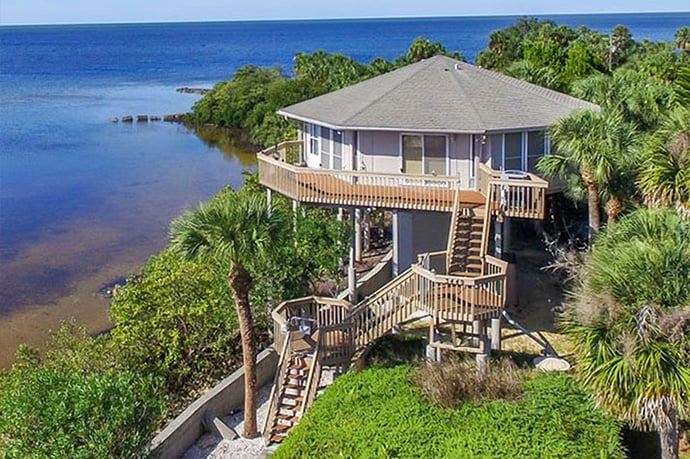 What comes to mind when you imagine a pre-fabricated home? Probably an inexpensive, cookie-cutter structure that is often the first step on the home-owning ladder. Here, in Clemmons, we have a company, Topsider Homes, that manufactures a selection of unique, pre-fabricated homes that can range from 450 to 18,000 square feet priced from $75,000 to millions of dollars.

In 1968 the first Topsider home was manufactured in an old warehouse and erected on a mountainside near Boone. It had an ingenious, patented, pedestal structure which was ideal for difficult sloping terrains, such as ski areas. Its octagonal design and floor-to-ceiling windows permitted panoramic views from every room. It also soon became obvious that its strength and durability made it suitable for many other challenging locations and environments. The company grew and expanded to a disused tobacco warehouse in Yadkinville.

In 1980 the business was purchased by Sheldon Storer. While having no background in pre-fabricated home construction, he saw the potential in Topsider. Under his guidance, it steadily grew. New resorts became a significant customer. In 1986 he placed a small advertisement in an American Airlines in-flight magazine. It generated 3,000 callers. Sales to the individual retail market took off. Rapid expansion soon outgrew the Yadkinville facility, so in 1993 a 15-acre site off Idols Road was purchased and now boasts the multiple offices, warehousing and manufacturing buildings necessary to meet demand. In addition, there is an on-site 20,000 square foot Design Center.

A potential client can select existing designs, modify them or suggest plans for their own individual dream house. It offers one-stop shopping, which includes everything from floor coverings to lighting. Each home is custom created and engineered to meet all codes for its proposed location.

Once the design has been finalized fabrication begins. The entire structure is assembled and documented in-house to ensure ease of assembly on site. It is then broken down and meticulously packaged for shipment either on flatbed trailers or in containers.

Sheldon Storer’s entrepreneurial spirit has created a thriving business in our Village and, in the process, is spreading the Clemmons name around the planet.